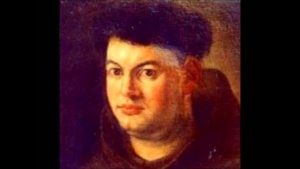 (also Lodovico Viadana; * about 1560 in Viadana near Parma; † May 2, 1627 in Gualtieri) was an Italian composer and member of the Franciscan Observant Order. His musical period is at the intersection of the Renaissance and the Baroque periods.
His birth name was Lodovico Grossi. It is possible that Viadana studied with Constanzo Porta. In 1594 he was appointed choirmaster of Mantua Cathedral. In 1597 he went to Rome. Back in Mantua he became choir director at San Lucca in 1602. Viadana was then active in the same position in various northern Italian cities, including Concordia near Venice and Fano. From 1614 to 1617 he worked for his ecclesiastical order in the province of Bologna, in addition to Mantua in Ferrara and Piacenza. Around 1623 he retired to the monastery of Santa Andrea in Busseto. 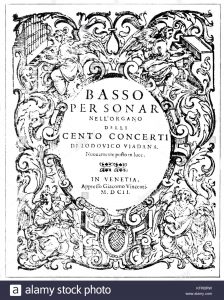 Viadana was the first important composer to use the newly developed technique of the figured bass (continuo) in his Op. 12, Cento concerti con il basso continuo – Concerti a una voce con l’organo.
With his 100 Concerti ecclesiastici, which were revolutionary in this respect, he published in 1602 the first proven solo compositions in the history of church music, which do not derive their harmony from the coexistence of different, contrapuntally worked solo voices, but are rather supported by a keyboard or plucked instrument. Although the middle parts of this movement are no longer notated, they are still subject to the same rules that would have applied to the middle parts of a written vocal composition. Technically, these works, written in a new style, do not yet move too far away from the imitative vocal movements of the previous epoch, but a new awareness of vertical relationships between the individual voices enters the music.

His Salmi a 4 cori op. 27 are among his best works. They are composed in concertato style and contrast five solo voices, a three-part choir and various instruments (3 organs, chitarrone, strings, bassoons and trumpets).