Pierre Guédron (also Pierre Guesdron; * about 1570 in Châteaudun; † after 1620 in Paris) was a French singer and composer. He was one of the innovators of French music in the early 17th century and one of the first creators of a dramatically oriented ballet. 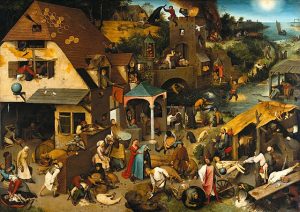 Pierre Guédron’s career was rapid and continuous: beginning as a simple cantor, he ended it less than thirty years later as Superintendent of the King’s Chamber Music (the highest possible position, along with that of sub-master of the King’s Chapel), while at the same time publishing a considerable number of arias.

He is documented in 1585 as a choirboy in the chapel of the Cardinal and Archbishop of Reims Ludwig II of Lorraine-Guise. He performed as an alto at a Puy in Évreux. After his master was executed in 1588, Guédron entered royal service. He was initially a singer in the chapel of Henri III. In the course of the cultural reorganization by Henry IV, which also affected court music, he rose to the position of leader of the ensemble. During this time he probably also married Gillette Dugué.

In 1601 he was appointed Royal Chamber Composer, succeeding Claude Le Jeune, and in 1603 he was finally appointed chamber servant and music teacher. In the latter function he looked after the children of Maria de’ Medici. In 1613 he passed on both offices to his son-in-law Antoine de Boësset. Guédron ended his life with a considerable fortune, which he had acquired in royal service.

Guédron was the most important French composer of his time.
Guédron’s main compositional work is his vocal music for the “Ballets de cour” at the royal court. 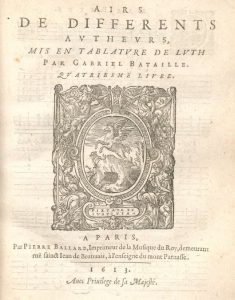 Guédron’s work is exclusively secular and vocal. His early arias are still in the tradition of late sixteenth-century arias, sometimes written in the measured music or vaudeville style, where the upper voice is favoured. His style then evolves from the 1612 book, towards freer arias, describing nobler passions and endowed with real melodramatic qualities, which he naturally employs in the court ballets to which he contributes. In this “court” style, the number of voices in the same piece varies; dynamic contrasts are accentuated; his melodies are pleasant and expressive. His final arias are an opportunity for him to work more on the correspondence between the word and his musical accent, which will be one of the concerns of his successors.

Guédron published 6 books of polyphonic court arias (a first unnumbered book and books 1 to 5, the last posthumous one), with a total of about 200 arias. Some of them were written for the main court ballets staged in Paris in the first two decades of the 17th century.

Many of Guédron’s polyphonic arias were also published in a version for voice and lute, some also for solo voice. The recitals, written for voice alone, were published only for voice and lute; this specific form of court ballet gave him the opportunity to approach the declamatory style of Italian monody.

Guédron was also a poet, author of verses that he sometimes sets to music himself. His employment in court ballets naturally brought him into contact with court poets, who were able to write pieces quickly.

The complete work is published in: Pierre Guédron, les airs de cour, ed. Georgie Durosoir. Versailles, Éditions du CMBV, 2009. The arias are published there in all their forms (polyphony, voice and lute).