Jehan Chardavoine (baptized on 2 February 1538 at Beaufort-en-Vallée, Anjou – died c. 1580) was a French Renaissance composer mostly active in Paris. He was one of the first known editors of popular chansons, and the author of “the only volume of monodic songs from the 16th century that has survived to our days.”

Chardavoine had a collection of songs printed for one voice that is very well known to this day:
Recueil des plus belles et excellentes chansons en forme de voix de ville, tirées de divers autheurs et Poëtes François, tant anciens que modernes. Ausquelles a esté nouvellement adaptée la Musique de leur chant commun, à fin que chacun les puisse chanter en tout endroit qu’il se trouvera, tant de voix que sur les instruments (“Collection of the most beautiful and excellent songs in the form of voix de ville, taken from various French authors and poets, both ancient and modern. To which texts have been newly adapted the music of their main tune, so that anyone may sing it at whichever place they may be, on voice as well as on instruments.”). Published in 1576, it is the oldest collection of French popular songs ever printed. It begins with an epistle addressed to “The readers”, “on this 12th day of November, 1575”. It contains 186 songs based on strophic poems. Some of the songs were simply collected and published by Chardavoine, while others are his own adaptation to monody of previous polyphonic works by composers such as Jacques Arcadelt, Pierre Certon, and Pierre Cléreau. In most cases, he has transformed the original music to such an extent that it can be considered a new work.

Some of the poems to which Chardavoine adapted new music were anonymous, while others were by poets of his time, such as Clément Marot, Mellin de Saint-Gelais, Jean-Antoine de Baïf, Pierre de Ronsard and Joachim du Bellay.

Among the poems set to music and published in his anthology are the famous Mignonne allons voir si la rose and Ma petite colombelle, by Ronsard; Si vous regardez madame, by Du Bellay; and Longtemps y a que je vis en espoir, by Marot. Some of these airs have been reused by the polyphonists, as is the case with Une jeune fillette, converted by Clément Janequin —who was perhaps his pupil— into his Il estoi une fillette. 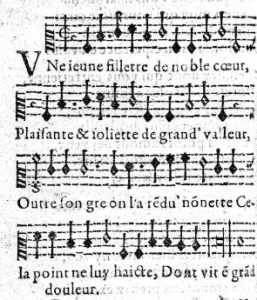 This song, whose melody is already documented in the 15th century [some musicologists date it to the 12th century], was a great success until the 18th century, so successful that many composers took it up throughout Europe. In Italy, for example, it was called Madre, non mi far monaca or simply La Monica as in Philip Friedrich Böddecker’s Sonata sopra La Monica. Religion itself appropriated it to make a song to the glory of the Virgin entitled Une jeune pucelle (A young virgin), whereas the original song is the complaint of a young nun who refuses her state as a nun.

Chardavoine’s collection is unique, being the only one to provide one-voice music on poems supposedly prevalent at that time. It claims to belong to the genre of “voix-de-ville”, that is to say, a way of singing that favours the voice from above, a genre that historically appears to be one of the sources of the air (as opposed to polyphonic song, where voices are equivalent).

Among the poems he set to music and published in his anthology are the famous Mignonne allons voir si la rose and Ma petite colombelle by Ronsard, Si vous regardez madame by Du Bellay and Longtemps y a que je vis en espoir by Marot.