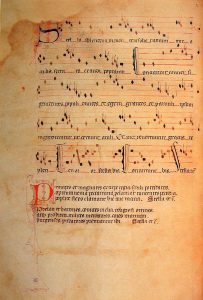 (Catalan for “Red Book of Montserrat”) is a collection of late medieval songs and liturgical texts. The manuscript from the 14th century is still kept today in the Montserrat monastery near Barcelona in Catalonia.
The manuscript was written around 1399 and originally contained 172 leaves (folia), 36 of which were lost or destroyed over the centuries. Of the 137 preserved folias, 12 contain songs and notes (fol. 21v to 27r). The current title of the manuscript refers to the red binding in which the pages were bound in the 19th century.

The Benedictine monastery on Montserrat was an important place of pilgrimage for the veneration of the Virgin Mary at the time when the manuscript was written. The Llibre Vermell contains songs and poems that served the devotion to the Virgin Mary. For instance, it contains the first example of the goigs (popular poems about the Seven Joys of Mary), Los set gotxs recomptarem, which have been handed down to the present day.
Since Montserrat had no overnight accommodation, the pilgrims had to spend the night in the church. They transformed the liturgical space into a pilgrims’ hostel. The songs of Llibre Vermell were meant to replace the traditional secular songs and dances of the celebrating pilgrims during the devotion. To achieve this, some of these songs have a folk sound. Probably the melodies of traditional songs were used, while the secular texts were replaced by religious ones.

Although the texts themselves were not written until the end of the 14th century, it can be assumed from the style that the songs themselves are older. The motet Imperayritz by ciutat joyosa contains two different texts which can be sung simultaneously. This style was no longer in use when the collection of songs was put together.