[də’lib] or Clément Philibert Léo Delibes (* February 21, 1836 near Saint-Germain-du-Val (Département Sarthe); † January 16, 1891 in Paris) was a French composer. With his memorable melody, rhythmic brilliance and sparkling colorful orchestration, he was one of the most popular stage composers of the Romantic period. He enlivened the art of ballet like nobody else since his compatriot Rameau, but he also stood out with some operas. Besides he created church music and songs. 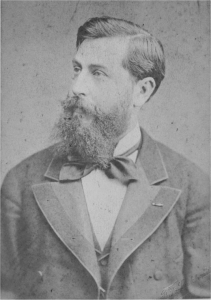 The son of a postman and an artistically gifted mother, he studied at the Paris Conservatory from 1848, among others with Adolphe Adam. Afterwards he was organist at various churches and répétiteur at the Théatre Lyrique, from 1865 second choir director at the Paris Opera. He made his debut as a dramatic composer in 1855 with the one-act operetta Deux sous de charbon.

In 1870 his ballet Coppélia (based on E. T. A. Hoffmann’s story Der Sandmann) was premiered at the Paris Opera with triumphant success. In 1871 he married the actress Léontine Estelle Denain. He gave up his position at the opera in 1872. In 1881 he became professor for composition at the Paris Conservatory. On April 14, 1883 the premiere of his opera Lakmé took place at the Paris Opéra-Comique, which later conquered the repertoire of opera houses worldwide. In 1884 he was elected a member of the Académie des Beaux-Arts.

He was buried in the Montmartre cemetery in Paris.

Delibes influenced composers such as Tchaikovsky, Saint-Saëns and Debussy. Referring to Delibes ballet Sylvia (1876), Tchaikovsky is said to have spoken in a letter of 7 December 1877 to Sergei Taneyev of his infatuation with this “charming” music. Had he only known Sylvia, he added, he would not have written Swan Lake.