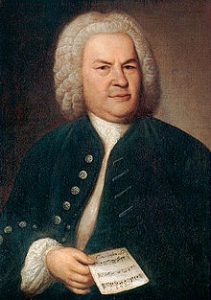 (* 21. March/ 31. March 1685 in Eisenach; † 28. July 1750 in Leipzig) was a German composer, cantor as well as organ and harpsichord virtuoso of the Baroque period. He is the most prominent representative of the Bach family of musicians and is regarded today as one of the best-known and most important musicians of all time. His works influenced subsequent generations of composers and inspired artists to create countless arrangements.

Et Misericordia (And mercy) is the sixth movement in Johann Sebastian Bach’s setting of the latin biblical canticle Magnificat. It is set as a duet for alto and tenor and begins with an undulating movement in 12/8 time, played by violins and violas. In the D major version these strings play con sordino, flutes doubling the violins.

Traditionally, Bach composed the first version of the work in E flat major during Advent in 1723. In contrast, Bach researcher Andreas Glöckner hypothesized in 2003 that it had already been written for a performance on the Feast of the Visitation of the Virgin Mary on 2 July 1723. Following the tradition of Leipzig church music, four German Christmas carols were inserted into the Latin text for a performance on a Christmas festival – not necessarily in 1723, since such a performance is not documented this year. According to Glöckner, the handwritten findings of the autograph speak in favour of a later insertion. The four inserted Christmas carols were played in a small instrumentation from the small, today no longer existing “swallow’s nest” gallery of the Thomaskirche. The fourth of the songs has only been preserved in fragments, but could be reconstructed because it is parodied in the cantata BWV 110, Unser Mund sei voller Lachens, in movement 5. For the second version in D major, Bach changed the instrumental instrumentation, defused the harmonically more daring version of 1723 in numerous details, and repainted the inserted Christmas carols.

Traditional setting of the German Magnificat

The traditional setting of Luther’s German translation of the Magnificat (“Meine Seele erhebt den Herren”) is a German variant of the tonus peregrinus, a rather exceptional psalm tone in Gregorian chant. The tonus peregrinus (or ninth tone) is associated with the ninth mode or Aeolian mode. For the traditional setting of Luther’s German Magnificat that is the minor mode for which the last note of the melodic formula is the tonic, a fifth below its opening note. 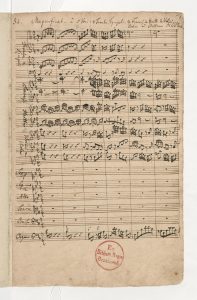 The tonus peregrinus variant that is associated with Luther’s German Magnificat appears in compositions by, among others, Johann Hermann Schein, Heinrich Schütz, Johann Pachelbel and Dietrich Buxtehude. Bach uses the melodic formula as an instrumental cantus firmus in movement 10 (Suscepit Israel) of his Latin Magnificat. He uses it again in his “German Magnificat”, i.e. the cantata Meine Seel erhebt den Herren BWV 10 composed for Visitation of 1724, in the chorale harmonisations BWV 323 and 324, and in the fourth Schübler Chorale BWV 648. Also in BWV 733, Fuga sopra il Magnificat, the melodic formula is used as a theme: this chorale prelude may however be the work of Bach pupil Johann Ludwig Krebs.