(also: Domingo Escarlate (Portuguese) or Domingo Escarlatti (Spanish); * 26 October 1685 in Naples; † 23 July 1757 in Madrid) was an Italian composer and harpsichordist. His main importance lies in the sonatas for harpsichord, which are among the most original of their genre in the 18th century.

The most important part of Scarlatti’s work are his 555 surviving harpsichord sonatas. The Essercizi of 1739 and a few other sonatas published during his lifetime established his fame and influenced the works of other composers such as Johann Sebastian Bach (Fantasia in C minor BWV 906, Goldberg Variations), Jacques Duphly, Pietro Domenico Paradies or Muzio Clementi. Handel is a special case because he and Scarlatti met in their youth and apparently influenced each other a little. On the Iberian peninsula, a ‘school’ of keyboard virtuosos was created, including Carlos Seixas, Antonio Soler and José de Nebra.

All in all, Scarlatti’s sonatas are extremely diverse in composition. However, there are some basic characteristics:
The sonatas are in two parts, both parts are repeated. If the sonata is in major, the first part usually modulates from the tonic to the dominant, in the following second part the harmonic course leads back from the dominant to the tonic. In some major sonatas, however, both parts end in minor, while others have a second part that does not begin with the dominant but with a more distant key. If the sonata is in minor, the first part usually modulates from the tonic to the tonic parallel, the second back to the tonic.
Regardless of whether it is a sonata in major or minor, the sonatas have several motifs in the first part, which often recur in the second part. Frequently motivic work takes place, the harmonic texture is dense and sometimes leads to distant keys.
Another characteristic is the use of repetitive structures (repetitions). Several sonatas have the effect of archetypes of the piano sonata, which established itself a few decades later and was further developed in Vienna, for example. Scarlatti’s piano works can be attributed to a bridging function between the Baroque and Classical periods because of the change in style to the Sensitive Style. 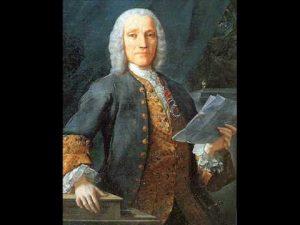 Apart from these characteristics, the experimental nature of many sonatas is striking. Above all, Domenico Scarlatti combined influences of Spanish folk music and Spanish dance forms with his early musical influences to a personal style. It is astonishing how nonchalantly he incorporates folksy elements into his sonatas composed for a feudal setting and integrates, imitates and transcends such sound experiences.

He also overruled the conventions of his time, especially with regard to the voicing. Many of his sonatas are extremely interesting harmonically, he sometimes modulated in distant keys (e.g. K 296, or K 490), and also liked to use enharmonic change (e.g. K 296, K 206). In these things he was far ahead of his time, sometimes creating quasi-romantic or quasi-impressionistic effects.

On a technical level, Scarlatti enters a new stage of virtuosity with wide leaps, crossover of hands, fast tone repetitions, passages in sixths and octaves, broken chords and scales at a rapid tempo over several octaves, arpeggios over up to four octaves, leaving behind everything a harpsichordist had previously been required to do.